There exist many routes from a source to a destination in a given graph but finding the optimum route at the lowest cost is extremely difficult. The term “swarm” comes from the field of artificial intelligence. In swarm intelligence, there are a number of shortest path techniques used to overcome this problem. Many research papers are available to tackle routing problems using PSO Rehab and Abdel-Kader (2011), all of which employ the same technique but use various particles encoding in the discrete form Baburaj and Vasudevan (2008). To tackle this problem, we designed a simple encoding approach it breaks the space into smaller space of reduced size after that combine all the results for evaluating the optimal path, it works on the the greedy approach principle.

2. USE OF PARTICLE SWARM OPTIMIZATION

Swarms are a group of particles in PSO that are used to discover the shortest path from source to destination of a network. Every particle has an initial location (its current position in time), a personal best position (its best position among all particles in search space), and associated   velocity of every particle. During this method, every particle tries to move towards the particle closest to the optimal solution, but the best solution is obtained from Xu et al. (2007)

Assume that G is a multicast tree

Create an initial swarm at random

Until the threshold termination is reached

To solve multicast routing problem by using PSO, in this network vertex

is a source vertex and

called destination vertex .In starting iteration of PSO we have initially determined the random route from source to destination because every particle associated in multicast network has capable to give the solution of problem .In initial stage network break the paths sequentially into small space.

Consider the starting velocity of each particle is zero in equation (2), for which the “P best “defines initial routes as the current best paths of particles as follows

we get Gbest is 1−6−7−8, by using Euclidean distance formula

Similarly, the particle’s velocity can be determined for path -1, path-2 and path-3 in Table 1 obtained as follows

The position of each particle is updated in accordance with the new velocity. Final result, the procedure for modified the position s of all particles associated network in Figure 1 is defined as

For last (3rd) particle we find the new position

The three p-best represented in Figure 1 by dark line. Using a dark dashed line ,one G is preferable .Following the update of the second particle ,we now have a set of nodes from which we can try to discover a route from source to destination .one advantage of this strategy is that we don’t have to search all nodes in the network ;instead, we only have to explore paths between these nodes .As a result ,all networks are divided into little networks, and we search inside this small group of networks ,with the node positions of these small closed networks changing by  dynamically .when the associated particle’s velocity and position are changes simultaneously ,every   particles eventually produce a better solution. 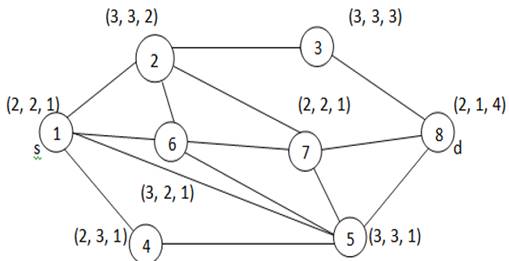 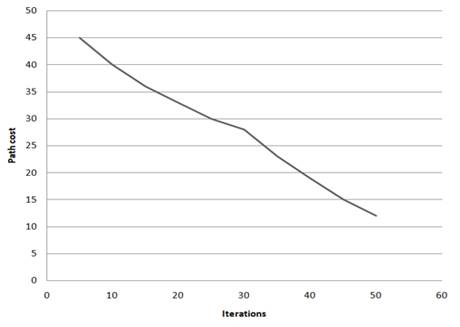 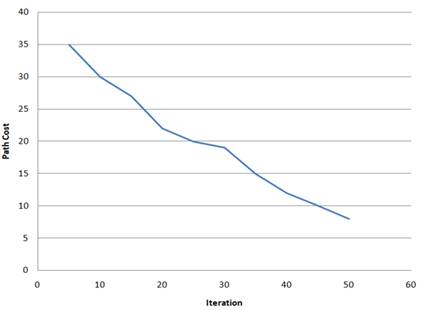 Many approaches to solve the routing problem using PSO have been described, but this one stands out since it uses simple encoding particles and is straight forward to implement. when by increasing the number of particles or iterations, the result is more accurate. This method can be implemented to tackle not only routing but also discrete problems.

The authors declare that they have no conflicts of interest.