Gandiolais is located on the Atlantic fringe of the northwestern Senegalese coast, from Saint to the mouth of the Senegal River. It is characterized by dunes delimiting basins in which vegetable cropping is practiced. This major activity of the population is a solid foundation in the development of the locality. In the past, these dunes were fixed by a strip of Casuarina equisetifolia (filaos), 31 km long and 200 m wide, which prevented the burial of the vegetable cropping basins. The "Gandiolais" area thus contributed to the country's supply of horticultural products.

Today, the protection of this area by filaos is no longer effective because the filaos do not regenerate Fall (1994) and years of drought and certain human activities have increased the silting up of the vegetable cropping areas. The agricultural vocation of the "Gandiolais" is therefore very much compromised.

The present pedological study will provide a better understanding of the silting up of the vegetable crops areas in Gandiolais. It will also provide basic elements for their preservation and valorisation.

2.1. CHARACTERISTIC OF THE STUDY ARE

Gandiolais is located southeast of Saint Louis in the rural community of Gandon Figure 1. Its particular configuration has a great influence on the economic activity of the populations. 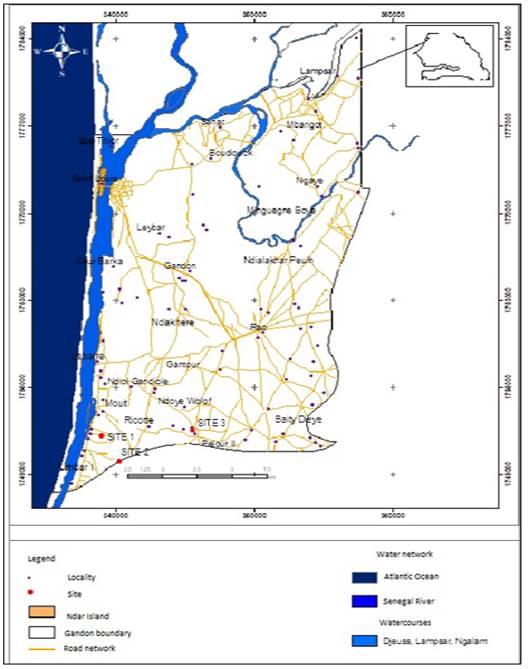 The Sahelian-type climate is strongly influenced by the proximity of the sea. It is characterized by the alternation of a rainy season and a dry season. It presents a great inter-annual variability of the circulation of the air masses, a low rainfall, and a high humidity.

The vegetation is a step with relics of Guinean type forests, characteristic of the "Nia yes". It is dominated by woody and thorny species of the genus Acacia associated with euphorbiaceae bushes and herbaceous plants.

Gandiolais is located in the Senegalese-Mauritanian coastal basin dated from the Mesozoic to the Cenozoic. Its soils are Quaternary sands where only the Ogolian and post-Ogolian periods are known.

In the Ogolian period (20 000 - 12 000 years B.P.) a desert climate allowed the establishment of red dunes by continental trade winds. These dunes are oriented NE-SW.

In the Tchadian period (12,000 - 7,000 years B.P.), ferruginous soils were formed on the Ogolian dunes and hydrographic networks, and lakes were established in the interdunes.

In the Nouakchottian (7,000 - 4,200 years B.P.), marine transgression and high rainfall reinstalled the lakes and the dry phase at the end of the Chadian reinstalled the dried-up valleys.

The Subactual (2 000 - 1 700 years B.P.) and Current are marked by a desertification which is reflected by a decrease in rainfall. The dunes are reactivated and tend to fill in the inter-dune depressions.

The soils of the Gandiolais are divided between dunes and interdunes Chareau and Fauck (1965), Ndiaye  (1995) as indicated on the 1/500,000th morpho pedological map of Senegal Figure 2. 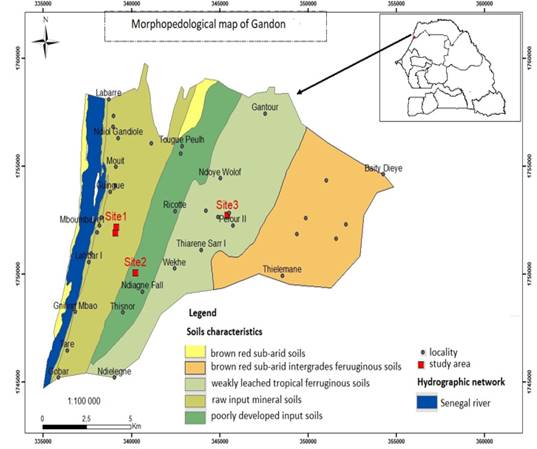 The shorelines are yellow and white dunes on which have developed respectively, young soils not very developed and raw mineral soils brought in by wind. These soils are sandy with a very weak or absent humus horizon.

A sampling point was chosen in each unit of the Gandiolais dune system (white, yellow, and red dunes). Topographic surveys were then carried out to describe the landscape and select the locations to be sampled. Several soil pits (1m x 1m and 1.5m deep) were dug, augering was carried out and soil samples were collected. In the laboratory, the samples were air-dried, and physical and chemical analyses were performed.

The wind was also studied to better understand the silting up of the basins. Using satellite images, points where market gardening is heavily practiced were located on the dune systems and plotted on the location map. For the topographic survey, we applied the tacheometric mesh method using a "total station". The base of the canvas is placed on the dunes and these GPS coordinates are entered into the "total station" in order to georeference the location.

The other points are measured by reflectors supported by rods placed on the points to be surveyed; an optical viewfinder allows the tacheometer to record the coordinates. The recorded values are transferred to the computer by the Leica Survey office software and plotted on a digital map by the Covadis software to generate contour lines.

To understand the role of wind in the movement of particles, its erosivity and frequency were studied for a decade using the formula Guettouche and Guendouz (2007).

Sections were taken along the transverse axis of the dunes and inter-dunes in order to analyse the erosion patterns, occupation, grain size and organic matter of each morpho-sedological unit. Figure 4, Figure 5, Figure 6. To represent the frequency of wind direction, the number of times the wind direction matched the one on the axis was calibrated using wind roses.

The results obtained allowed us to study the state of wind erosion of the soils and the mechanisms of silting up of the market garden basins. 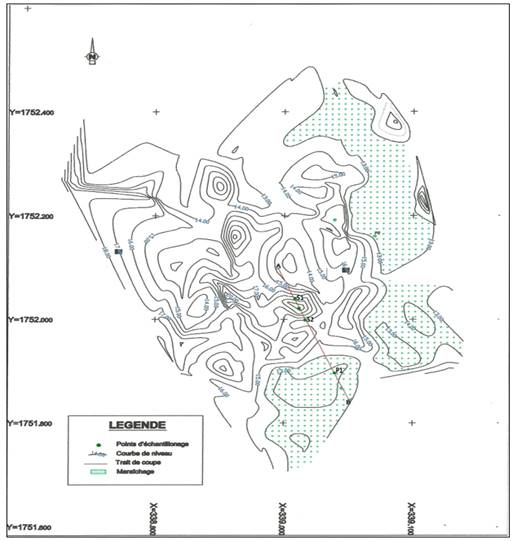 Site 2 is located in the yellow dunes which are Figure 4 elongated in a NW-SE direction and have a maximum altitude of 20 meters. Their interdune depressions are 13 meters high. 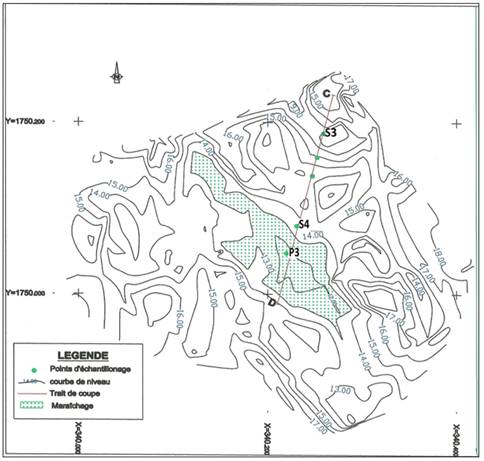 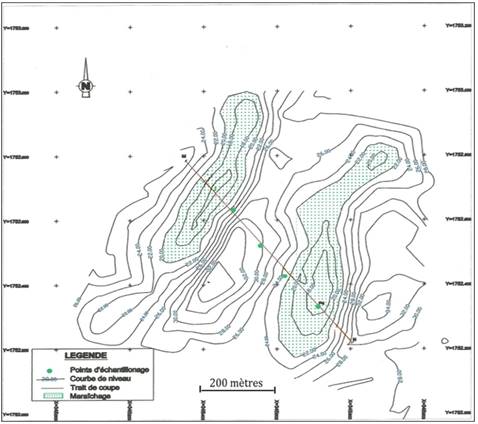 Due to their convex and concave profiles respectively, these morphological units react differently to the action of the wind because the dunes are largely exposed and the interdunes protected.

Cross-sections were made on each type of dune Figure 3, Figure 4, Figure 5 along the wind direction in order to analyse the erosion patterns, occupation, grain size and soil organic matter of each morphological unit Figure 6. 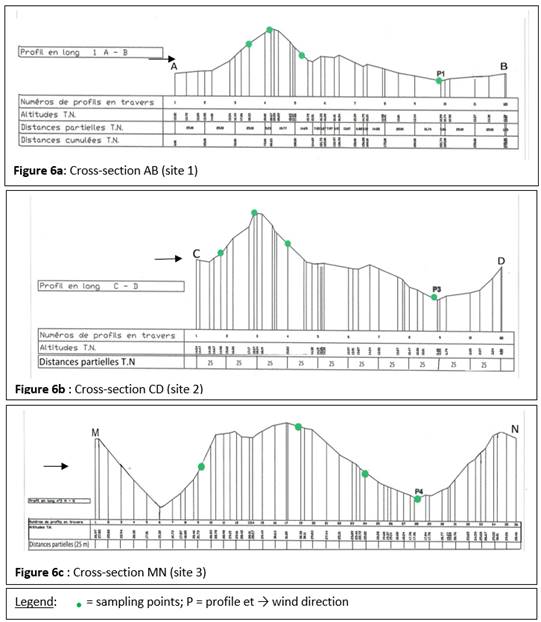 5. TYPOLOGY OF THE SURVEYED SOILS

The crude mineral soils and the less developed soils of the white and yellow dunes are covered by a very sparse herbaceous steppe (Photos 1 and 2). The dominant species are Opuntia tuna and Maytenus senegalensis.

The slightly leached ferruginous soils of the red dunes are occupied by a woody steppe (Photo 3). The dominant plants are woody species such as Acacia albida, Acacia raddiana, Acacia seyal and Balanites aegyptiaca, Euphorbiaceae bushes (Euphorbia balsamiphera) and a sparse herbaceous carpet composed of seasonal grasses.

Wind erosion is marked by deflation which is highlighted by ripples, shell fragments and uprooted plants at the flanks. 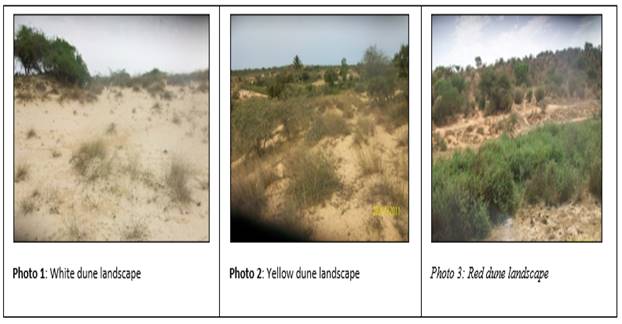 The particle size analysis of the dune soils shows a sandy texture Figure 7 with more than 90% of fine and medium sands Figure 8. This sorting is due to deflation, which depletes the flanks of fine sands, it is however absent on the yellow and red dunes where the vegetation is more dense. 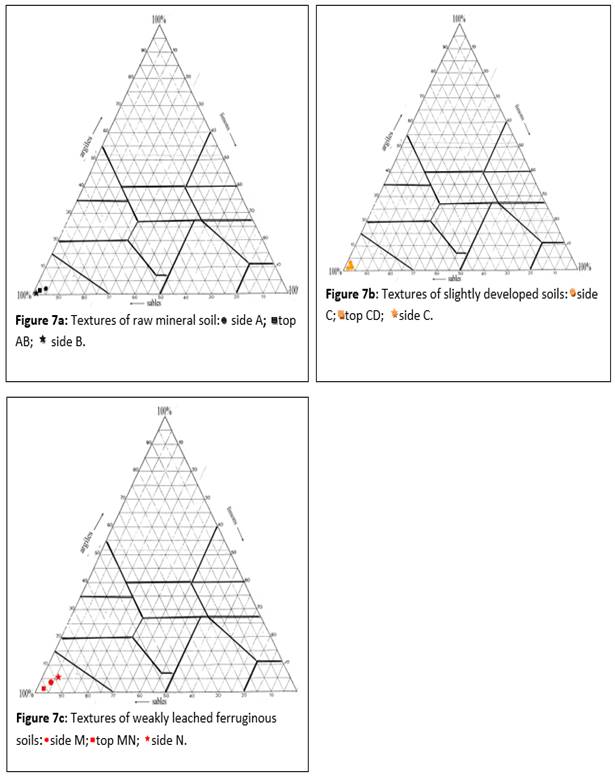 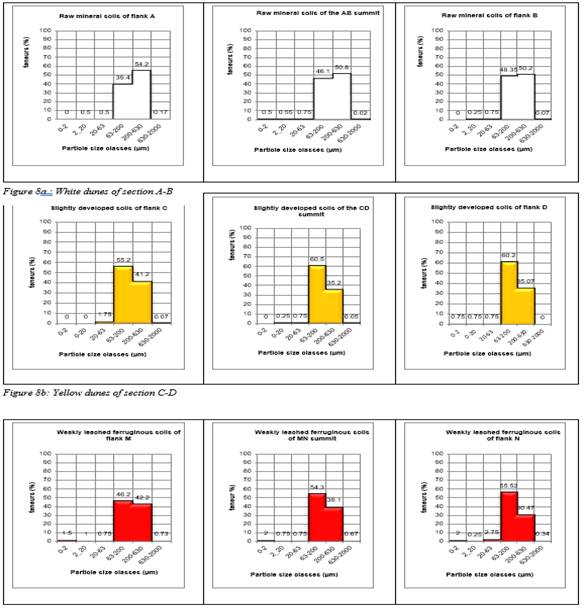 These interdune formations are reserved for market gardening Figure 8 if they are not abandoned due to erosion and salinization. 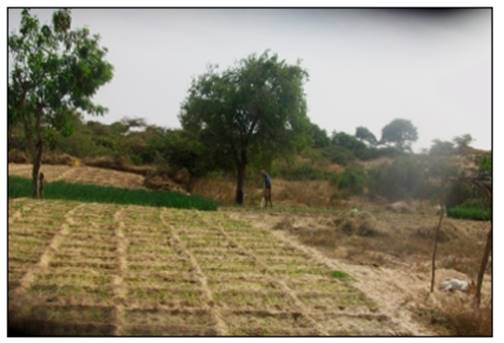 The soil profiles, P1 and P4 Figure 10 show respectively a dark paleo sol of market gardening and a fine sedimentation on the sandy substratum, thus an accumulation. 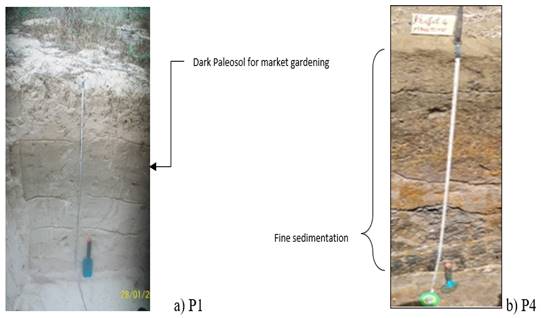 The crude mineral soils and the slightly developed hydromorphic soils have a sandy texture on all of their profiles Figure 11. Their texture is composed of more than 90% fine and medium sands. There is an enrichment of fine sands and a depletion of medium sands in the surface horizons Figure 12. 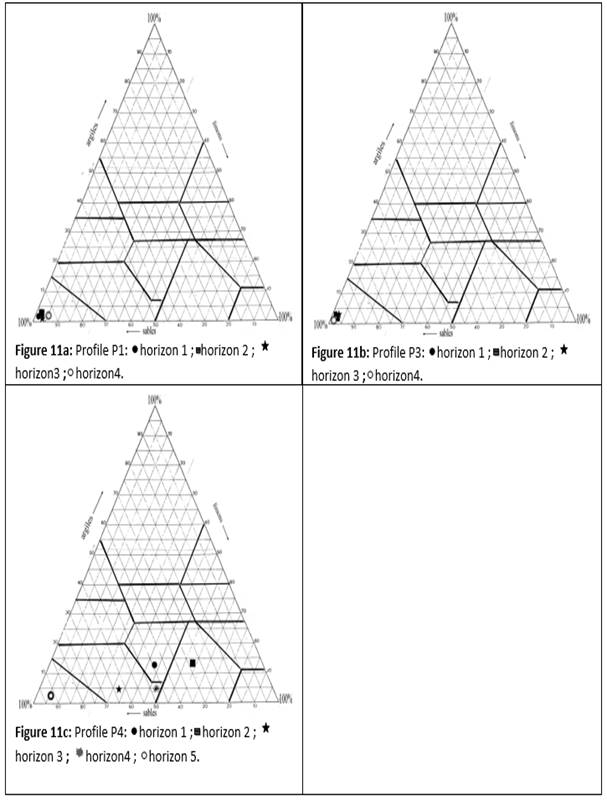 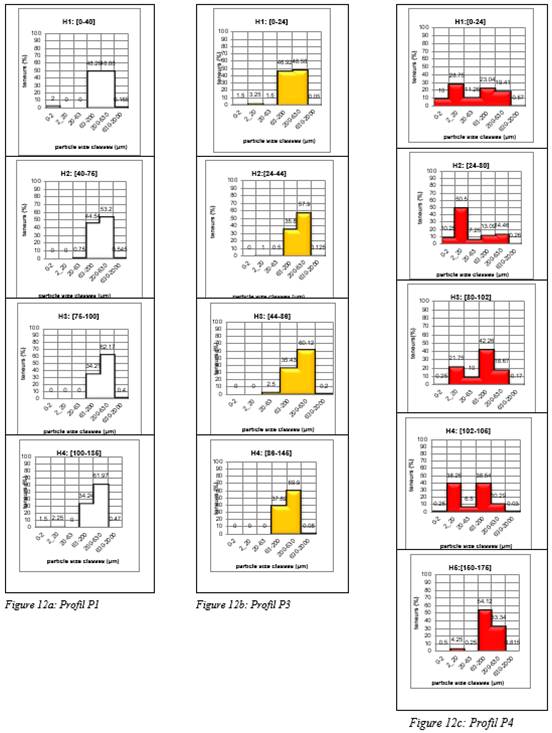 In the dry season (October to May), the aridity generates a dry wind (harmattan) which acts effectively on dry soil (from February to May). The high humidity due to the northern trade winds Thiam (2005) moderates its aggressiveness from October to January.

In the rainy season (July to September), rainfall humidity reduces the erosive effect of the wind by holding soil particles in place.

On a monthly scale, the evolution of the erosivity index Figure 13 shows a seasonal wind activity: 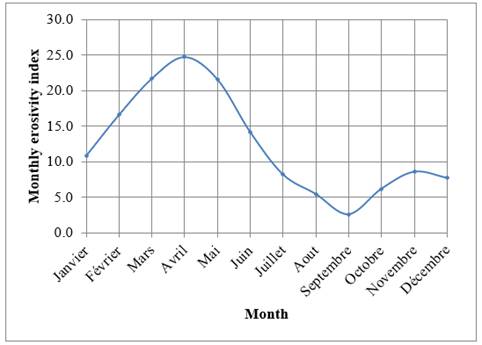 On an annual scale, we find a decadal average erosivity index of 148.2. This value is expressed by a permanent aridity but with slight improvements in rainfall Table 3, and average wind speeds between 3 and 4 m/s (Appendix 3.1).

The monthly analysis of wind directional frequency Figure 14 shows a clear predominance of northerly winds during the dry season (October to May). During the rainy season (June to September) the flows tend to deviate towards the West. 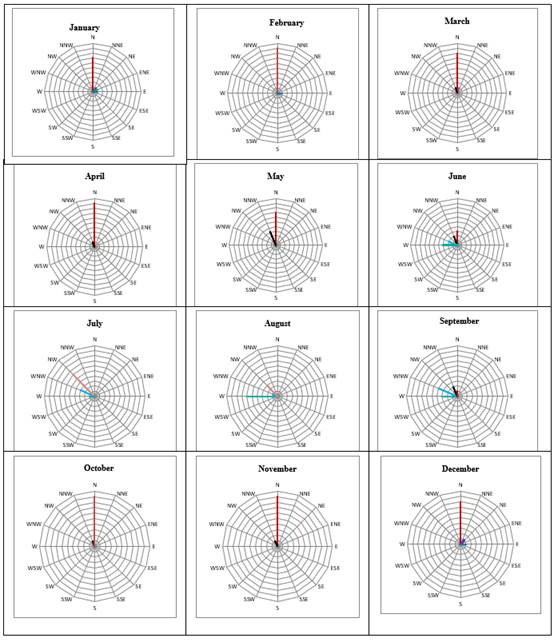 The factors of silting are climatic and pedological.

The climatic factors condition the erosivity of the wind because of the trade winds and drought.

The trade winds dominate the atmospheric circulation during the dry season and are the main dynamic agents of particle displacement. They act in a dominantly northerly direction on a dried-up soil.

During the drought, the decrease in humidity intensifies the wind activity because the cohesion of the soil is destroyed by the crumbling of the grains and the disappearance of the plant cover.

For pedological factors: dune soils are loose, dry and crumbled because of the sandy texture, low organic matter content, sparse vegetation cover and climatic aridity. They have low cohesion.

The convexity of the dunes plays an important role in the erosion of dune soils which are very exposed. They are not only subject to the action of the wind but also to the action of gravity which drags them down the slopes.

The silting processes are generally the wind input and the progression of white and yellow dunes.

The trade winds carry large quantities of fine sands and silts southward Figure 11. When they meet the dunes, they load up by deflation. If they lose speed through friction and overloading, the sandy-silty materials are deposited in the inter-dunes and the surface horizons are enriched with fine sands.

Figure 14 Schematic representation of the process of aeolian input of dune particles into the interdunes.

The dunes progress along the edge of the ocean where the vegetation is weak, and the wind is faster. The active role is played not only by the trade winds but also by gravity.

Due to its morphology, the Gandiolais is a market gardening area with a microclimate and favourable water conditions despite the poor soil. However, this agricultural activity is confronted with the silting up of production systems.

The results of the wind erosion study showed that the silting up of the market gardening basins is linked not only to the sensitivity of the dune soils to erosion, but also to the current climatic context in the northern Sahelian of the country, namely the velocity of the trade winds and the drought.

Interdune soils where market gardening is practiced have surface horizons enriched in fine sands and silts as well as dune coverings in the coastal sector.  In the dry season, the erosivity of the harmattan is intensified by the arid climate.

The silting up of the market gardening basins is done by wind input (deflation) and progression of the white and yellow dunes (mass movement). It is linked not only to the sensitivity of dune soils to erosion (low cohesion and dune topography) but also to the current climatic context in the Sahelian North where the velocity of trade winds and drought are increased.

The silting leads to a deepening of the water table, which will reduce the humidity of the soil and lead to the mandatory construction of drainage works to cultivate large areas. The progression of the dunes narrows by strangulation of the market gardening basins, fills in wells and buries irrigation systems. The silting up of the dunes will thus increase the operating costs and decrease the yield of the market gardening basins.

The resulting consequences are enormous and lead to the abandonment of market gardening.

To solve this problem, we suggest restoring the windbreaks and fixing the dunes. But the strip of filaos can only decrease the wind speed; it is therefore necessary to fix the dunes and structure the soil.