Header compression is one of the techniques in data transmission to optimize available network bandwidth which was incorporated into the development of IPv6 protocol. These headers can be compressed, often saving more than 90%, which reduces bandwidth usage and makes efficient use of expensive resources. Other significant advantages of IP header compression include less packet loss and accelerated interactive response. IP header compression, in its simplest form, is the process of reducing the size of extra protocol headers before sending them across a link and restoring them to their original size upon receipt at the other end of the link.

Due to redundant header fields in both subsequent packets of the same packet stream and header fields of the same packet, it is possible to compress the protocol headers. Bormann (2002). In order to meet overall client demand and enhance the performance and quality (QoS) of data across the Internet, new Internet protocols are being deployed. Degermark et al. (1999).

-+hexadecimal is to handle the increase demand for IP addresses and provides better support for mobile IP and network security.

Additionally, it was said that the inclusion of the network-layer encryption technique known as Internet Protocol Security, (Psec), which doubled the size of packet headers from 20 bytes in IPv4 to at least 40 bytes in IPv6, substantially twice the IP operating overhead. EFFNET AB (2004). Historically, compressing protocol headers—like the IPv6 header—has been a desirable method of preserving bandwidth on slow lines, particularly wireless systems. Ercetin and Tassiuslas (2003) The techniques that shrink the 40-byte IPv6 header overhead to fewer bytes (2 or 4 bytes) would boost user throughput and the number of users a network could accommodate. This paper formulated two mathematical models namely maximum packet throughput (max_pkt) and header overhead percentage (hdr_ovh_pcent) to justify the performance of header size reduction on available IPv6 network bandwidth.

The concept of OSI/ISO reference model is that Information Technology (IT) systems vendors can select a protocol for each layer while ensuring compatibility with systems from other vendors that may use different protocols Knutson (2004). Meanwhile, OSI model had provided a common language for communications networking community Lilley et al. (2000).

A group of communication protocols called TCP/IP, or Transmission Control Protocol/Internet Protocol, is used to connect network devices on the internet.  TCP/IP streamlined the 7-Layer OSI/ISO model into 4-layer TCP/IP protocol stack as illustrated in Table 2. A private computer network will often implement TCP/IP as its communications protocol of choice (an intranet or extranet) Mary and Shacklett (2021).

Layer 4: Application Layer: This consists of protocols that support specific applications or services to end-users. For instance, HTTP is used for locating web servers, FTP is used for file transfer between hosts, SMTP provides e-mail transfer among end-users.

Layer 3: Transport Layer: It is responsible for message delivery between processes with end-to-end communication. TCP provides connection-oriented and reliable packets transmission in a specific order and checks for error in transmission while UDP is a connectionless-oriented and unreliable transport protocol.

Layer 2: Internet Layer: This is also known as network layer which sends the packets from any network and any computer to reach a destination irrespective of route they follow. IP is the most common internet-layer that routes source address to destination address on the network, ICMP is used by a host and gateway to send errors in transmission back to the sender i.e., error notification while the ARP associates the logical (IP) addresses with the physical (MAC) addresses.

Layer 1: Data-link: This layer is responsible for simply transmitting a frame of bits between cooperating processes on different machines.

The flexibility of IPv6 header to be compressed from 40 bytes to 2-4 bytes would definitely reduce the header overhead and allows small packets for bulk data with good line efficiency Murdocca and Heuring (2000). The UML diagram for IPv6 header compression is shown in Header compression takes advantage of the hop-by-hop redundancy of the headers in a flow of packets over a link Smythe (1995). Instead of sending the whole header, a compressed header can be sent.

A full header containing a context identifier, or CID, is sent over the network to start the compression of the headers of a packet stream.

Most of the fields in this entire header are stored as context by the compressor and decompressor.

The fields in the headers that make up the context have constant values; therefore, nothing needs to be transmitted over the network.  Upon the reception of a packet with an associated context, the compressor removes the IPv6 header, 40Bytes from the packet and appends CID which is 2-4bytes long EFFNET AB (2004). Then the compressed IPv6 header with CID = 90 (binary 1011010) is transmitted over the link to the receiving node where there is decompressor which examines the CID=90 with its own context array, if it is found it inserts IPv6 header back into the packet and transmits the packet to the exact destination. Figure 1 illustrates the initialization and operation of header compression and indicates that the reduction in the number of full headers transmitted can result in overall decreased overhead. 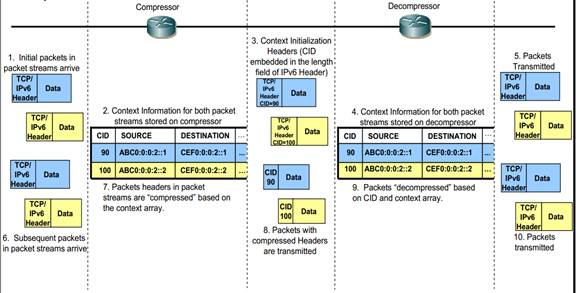 where max_pkt is the maximum number of packets transmitted per second,

bw is the bandwidth of the network link,

pload_z is the payload size and hdr_z is the header size.

where hdr_ovh_pcent is the header overhead percentage

hdr_z is the header size

pload_z is the payload size

Meanwhile, the performance metrics were simulated using MatLab Simulink from which graphical results were generated to evaluate the header compression effect on network bandwidth. A peer-to-peer network shown in Figure 2 was setup using Windows 10 computers and Ethernet cable to validate the performance of IPv6 connection over IPv4.

MatLab Simulink was employed to analyze the two empirical models in (1) and (2). The following were assumed in order to achieve ideal simulation results.

1)     Constant bandwidth of 512 bytes-per-second was used for all the simulations.

3)     Extension headers were not taken into consideration.

5)     Compression and decompression timings were negligible. 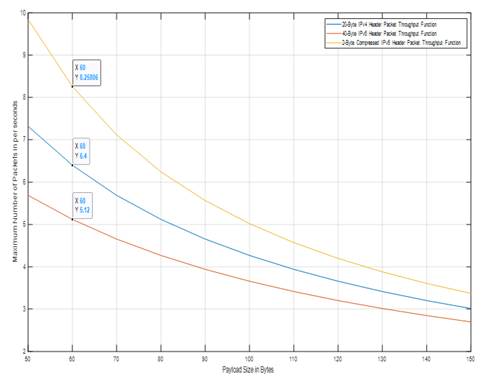 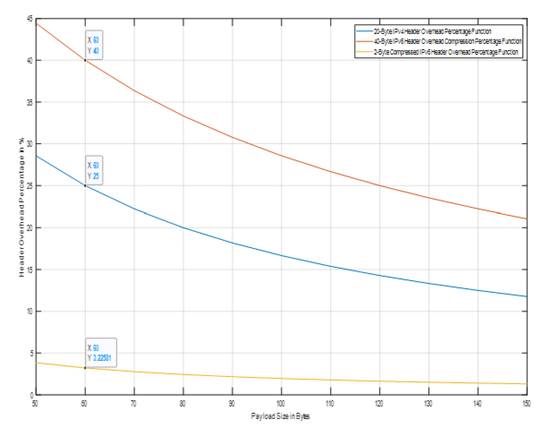 The simulation’s graphical results shown in Figure 3 and Figure 4 were generated based on the corresponding mathematical equations (1) and (2) for maximum packet throughput and header overhead percentage respectively.

This simulation result had demonstrated that more packets are transmitted with reducing the header size attached to a payload.

A simple peer-to-peer connection was setup between two Windows 10 computers using Ethernet cable to establish that IPv6 network is bandwidth-optimized compared to IPv4 network. The two computers were configured with IPv4 addresses 192.168.0.2/24 and 192.168.0.3/24 while the IPv6 addresses used are fe::3/64 and fe::2/64 respectively . 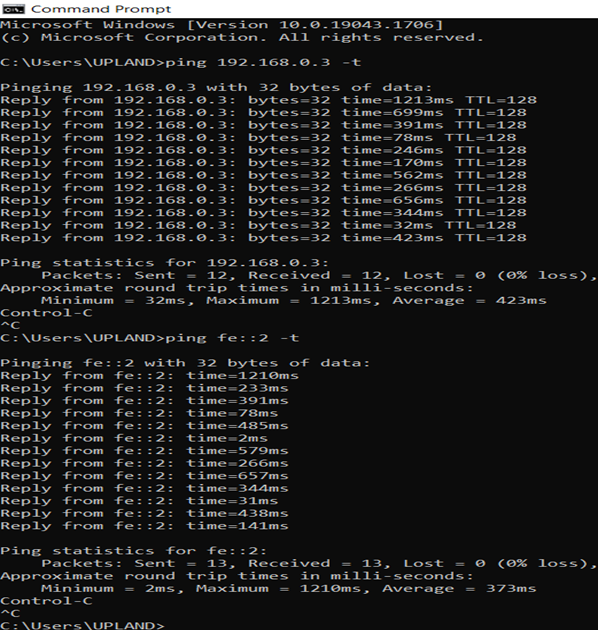 It could be deduced that the average round trip times (RTT) of 373m in packets transmission in the IPv6 connection is smaller compared to the IPv4 metrics which is 423ms.

Also, a careful check of the series of the IPv6 packets in the ping test shows a smaller transmission time compared to that of IPv4.

The numerical evaluations of the effect of reducing or compressing packet header had significantly shown that the embedded compression features in IPv6 protocol stack provide higher speed than IPv4 protocol. The ping test results also established the fact that the IPv6 network has a higher performance in bandwidth optimization with lower latency.

The deployment of IPv6 had started in full of newer systems including operating systems and network devices come with the provision of configuring IPv6 addresses to address the shortage in IPv4 address space and improve the routing core.