Improvement over standard distributions has gained popularity in statistical theory over the past few years. Typically, new distributions are created by combining existing distributions or adding a new parameter using generators. Alpha power transformation (APT) a novel approach for integrating an additional parameter in continuous distribution, was introduced by Mahdavi and Kundu (2017). Basically, the concept was put forth to add skewness to the baseline distribution. Then: Let g(x) be the probability density function (PDF) of a continuous random variable X.:

Where α is the shape parameter and G(x) and g(x) are the CDF and the PDF of the baseline distribution.

Mahdavi and Kundu (2017) developed a brand-new method for creating distributions by adding a second shape parameter to a well-known baseline distribution. They used the exponential baseline distribution to introduce the alpha power exponential distribution, and they researched the fundamental characteristics as well as parameter estimation for the suggested distribution. Alpha power Weibull distribution (APWD) was introduced by Nassar et al. (2017). The capacity of APWD to simulate monotone and non-monotone failure rate functions, which are often used in reliability studies, is what gives its significance. Moments, quantiles, entropy, order statistics, mean residual life function, and stress-strength were among the attributes of APWD that were discovered. The parameters were estimated using the maximum likelihood method. The significance of the APWD was demonstrated using of actual data sets. Devi et al. (2017) introduced the entropy of the Lomax probability distribution. They derived entropy of a Lomax probability distribution as well as their order statistics which is used in business, economics, actuarial modelling, waiting problems, and biological sciences.

This study’s objective is to provide a new more adaptable distribution. The structure of this article is as follows: We go over the distribution of Alpha power Lomax (APL) in Section 2. In Section 3, new statistical properties are investigated. The Renyi entropy is derived in Section 4. In Section 5, the stress-strength reliability is described. Section 6 presents the order statistics from the Alpha power Lomax. Section 7 examines estimate techniques. Section 8 provides a simulation study. In Section 9, application is offered.

In this section, we will define a new model is called alpha power Lomax distribution, denoted (APL), with three parameters (α, λ, β).

According to El-Houssainy et al. (2016) cumulative’s distribution function of Lomax distribution with scale parameter λ > 0 is

The probability density function corresponding to (3) reduces to

The CDF of APL is generated by renaming Equation 3 as a baseline cumulative function in Equation 2.

and corresponding PDF of APL is defined as follows

where λ is the scale parameter and α is the shape parameter.

The PDF curves for the APL distribution are shown in Figure 1, Figure 2, Figure 3 with various parameter values. 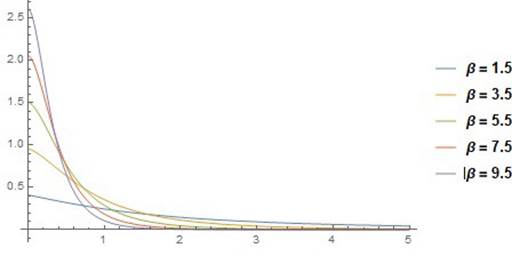 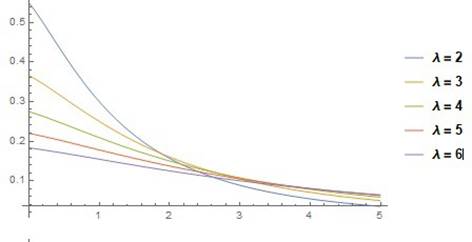 Figure 1, Figure 2, Figure 3 show that for various values of the parameters, the APLD density curve is uni- modal and positively skewed.

2.1. The survival and the hazard functions

The following forms could be used to represent the survival and hazard rate functions for the APL distribution, respectively.

Figure 4, Figure 5 display the survival function of APLD and the hazard function for different values of parameters. 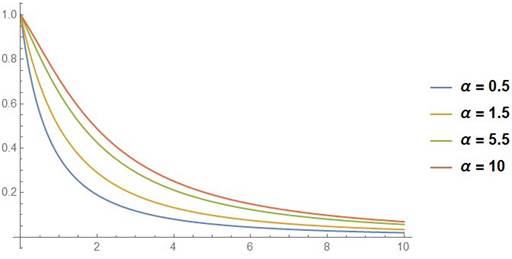 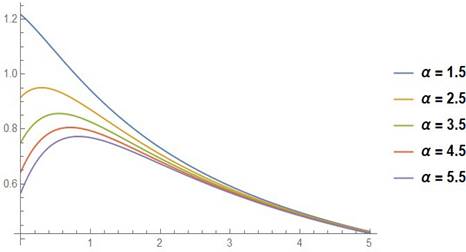 Let u = F (x) where U follows uniform (0, 1). By using the transformation method, we consider the random variable X of APL as follows

By taking the derivative of Equation 6 and equating it to zero and solving for x, mode becomes

This is equation is not linear. The Newton-Raphson method can be used to solve it numerically.

Because the APL’s moments are not exist, we’ll apply an alternate forms using quartiles. Bowley skewness was considered as an alternate measure to determine asymmetry (Kenney and Keeping (1962)) of a distribution that takes the form

where Q represents the quantile function from Equation 9. Moors (1988) proposed a different method to determine the kurtosis of the distribution based on octiles, and it has the following form

1)     For constant values of λ and β, the median, mode increasing as α increases, while the kurtosis and skewness decrease.

2)     For constant values of α and β, the median and mode increase while λ is increasing but the kurtosis and skewness remain stable.

3)     For constant values of λ and α, the mode increasing as β increases, while the median, kurtosis, and skewness decrease.

Renyi entropy was invented by Renyi (1959). The variation of the uncertainty is measured by a random variable’s entropy X. Additionally, Song (2001) has effectively used the theory of entropy to a variety of applications, including information theory, engineering, and physics.

Theorem 1: The Renyi entropy of APL

Proof. For the density function f(x), the Renyi entropy is defined as:

by substituting z = (1 + x) −β and using the series representation,

Hence, the theorem is proved.

Proof. The stress-strength reliability can be defined as

using the Equation 5 and Equation 6 of APL distribution, stress strength R, can be obtained as

by substituting z = (1 + x) −β and using the series representation

Hence, the theorem is proved.

denotes the order statistic of a random sample of size n from APL distribution with CDF, F(x), and PDF, f(x), the PDF of Xr is given by Balakrishnan and Cohen (2014)

By using Equation 5,  Equation 6 the PDF the rth order statistic from APLD is given by:

The PDF of the smallest order statistic, X1, is as follows

And the PDF of the largest order statistic, Xn, is given by

and the log-likelihood function is

Then by deriving the log-likelihood function with respect to α, λ and β we get

After solving Equation 25, Equation 26 and     Equation 27 simultaneously using the Newton-Raphson method in Mathematica 12.0, the MLE of α, β and λ could befound.

After solving Equation 29, Equation 30, and Equation 31 simultaneously using the Newton-Raphson method in Mathematica 12.0, the OLS of α, β and λ could be obtained.

After solving Equation 33, Equation 34 and Equation 35 simultaneously using the Newton-Raphson method in Mathematica 12.0, the WLS of, and could be obtained.

To make sense of the theoretical findings, simulation using Mathematica 12.0 have been carried out, of the estimating issue presented in the earlier parts. Simulated research has been carried out for mean square error (MSE) and average MLEs.

The estimator computation algorithm is

Step 2: Use the Newton-Raphson method to solve the equations in to estimate the MLE, LSE and

Step 3: Compute the estimator of entropy from (12), using the estimates in the previous step.

In this section. The inverse Lomax distribution (ILD) introduced by Hassan and Mohamed (2019) and the exponential lomax distribution (ELD) introduced by Abdo et al. (2015) will be used to compare the fit of the APLD with other lifetime models that are well-known. Additionally, we take into account the model selection parameters, such as the Akaike information criterion (AIC), log-likelihood (

all point to a better fit of the data, Where

k is the number of parameters; n is the sample size and

(θˆ) is the log-likelihood function evaluated at the highest likelihood estimates.

Data I: COVID-19 cases every day in Saudi Arabia

From 1 April to 2 May, this information reveals the daily COVID-19 instances in Saudi Arabia. These statistics were obtained from the Saudi Ministry of Health’s website, located at https://covid19.moh.gov.sa.  These findings are

The performance of the APLD in comparison to other models is shown in Table 6 along with the MLEs for the model parameters.

Table 6 shows that, among the models taken into consideration, the APLD has the smallest AIC, CAIC, BIC, and HQIC values. Which shows that the APLD seems to be a model that might work well with the data set.

The performance of the APLD in comparison to other models is shown in Table 8 along with the MLEs for the model parameters.

Table 8 is results show that while, e has the largest value and the APLD has the smallest AIC, CAIC, BIC, and HQIC values. As a result, the APLD performs better than other models.