Vertebrae, cranial base, jaws, nasal septum, and hyoid bone, which form the skeletal support of the airway, also play a role in growth Schendel et al. (2012). Since the posterior cranial base forms, the upper borders of the pharynx, the growth of this structure affects the growth of the pharynx. The growth of the sphenoid wings and the forward dragging of the palate cause the nasopharynx to expand. When the pharyngeal depth is measured as the distance from the posterior nasal spine to the basion, it is quite limited, and a small increase (9%) has been reported Tourné (1991). The main growth direction of the pharynx is vertical, and this is statistically significant with the age of the patient and continues until adulthood Martin et al. (2011). Vertical enlargement and downward rotation of the hard palate in sphenooccipital synchondrosis increases the height of the nasopharynx by approximately 38% and accounts for most of the increase in nasopharyngeal capacity Tourné (1991). Pharyngeal growth is transversely affected by changes in the medial pterygoid laminae.

Bergland reported in his study in 1963 that the increase in width started after the age of 6 and the increase in width accelerated during adolescence Aloufi et al. (2012). In a study in the literature, they stated that the thickness of the soft tissue in the posterior nasopharyngeal wall is maximum at the age of 5 years and decreases until the age of 10, and it increases slightly between the ages of 10-11 and continues to decrease. In the study examining the growth of soft tissues in the oropharyngeal region, they stated that the posterior pharyngeal wall measurements increased between the ages of 6-9 and 12-15, and little change occurred between the ages of 9-12 and 12-15 years. They also reported that the distance between the anterior border of the atlas and the PNS remained constant after the age of 12. This situation: shows that there is no increase in size after pubertal growth spurt in the pharynx bones Taylor et al. (1996).

The hyoid bone, which plays an important role in the realization of tongue functions, providing cranial balance and straightening the head posture; it is not connected to any bone in the skull skeleton, but is connected to the surrounding mandible, tongue, thyroid, and pharynx with suprahyoid and infrahyoid muscles Graber (1978), James and Hiatt (2010). The vertical growth of the hyoid bone is parallel to the vertebra. During growth, it maintains a relatively stable die position between C3 and C4 and moves with the mandible and vertebra Tourné (1991). In the early part of the intrauterine period, the hyoid bone is composed of hyaline cartilage. During its development, it is directly related to the cartilages in the styloid process Pettit and Auvenshine (2018). Its development is completed by the ossification of 6 different centers. Two of them appear in the middle of the cartilage, on the sides of the midline before or immediately after birth and combine to form the bone corpus Parsons (1909). The aim of this study is to evaluate pharyngeal airway measurements and hyoid measurements according to pre-peak, peak and post-peak growth-development periods.

This retrospective clinical study was conducted in the radiographic records of patients who applied to Süleyman Demirel University for treatment between 2018 and 2020. Ethics committee approval was obtained for our study. The study was carried out in accordance with the Principles of the Declaration of Helsinki. An 'Informed Consent Form' and a form stating that the materials can be used in scientific studies and publications are taken from each patient who applies to our clinic for treatment.

The sample size required for the study was calculated with the G*Power analysis (G*Power Ver.3.0.10, Kiel, Germany) at a significance level of 0.05 and a power of 80%, and it was determined that a minimum of 21 individuals were required for each group. More individuals were included in our study in order to increase the power of the study and considering the possible losses.

Selection criteria of radiographs; Schendel et al. (2012) skeletal Class I malocclusion (0<ANB<4), Tourné  (1991) no any pathology in the airway, Martin et al. (2011) no any congenital and/or acquired anomaly (cleft lip and palate etc.), Aloufi et al. (2012) detection of reference points properly in initial radiographs and having sufficient image quality, Taylor et al. (1996) the correct position of the head during the lateral cephalometric film is taken. 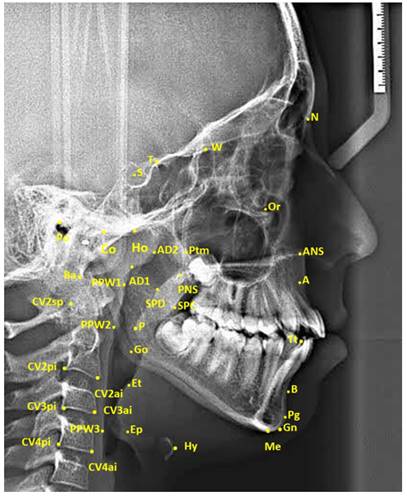 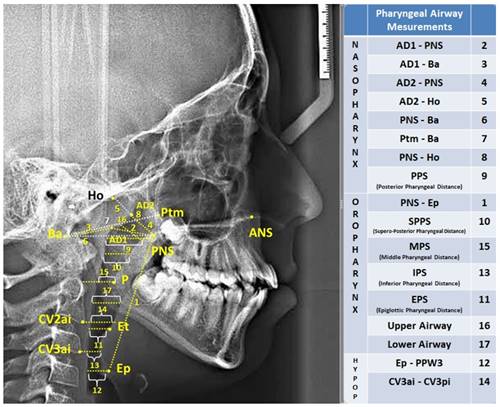 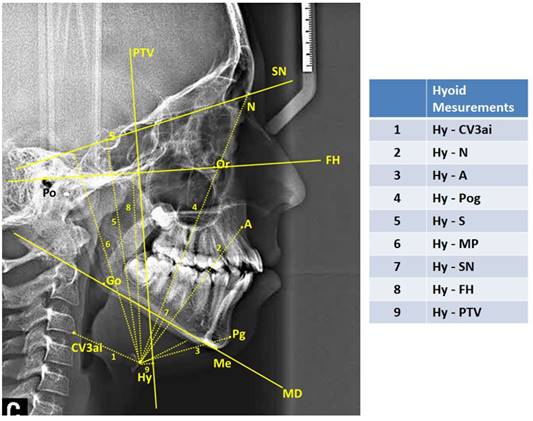 Whether the data had a normal distribution or not was determined by the Kolmogorov-Smirnov test. Parametric tests were used since it was determined that the parameters evaluated in the study were normally distributed. Descriptive statistics are shown as (Mean) ± SD (Standard Deviation). The distribution of gender and growth-development stages of the patients was compared with the Pearson chi-square independence test. One-way ANOVA test was used to evaluate the chronological ages and the mean differences of pharyngeal airway and hyoid measurements made on cephalometric films, and Tukey post-hoc test was used for pairwise comparisons.

In order to determine the method error of the measurements, 145 films were randomly selected from 531 lateral cephalometric films, and the measurements were repeated two weeks later by the same researcher, after blinding. Cronbach α coefficients were determined for each measurement. It was determined that the repeatability coefficients in our measurements were high (α>0.904). SPSS package program (SPSS for Win, veer 21.0; SPSS Inc, Chicago, Ill) was used for data analysis. The results were considered statistically significant at the p<0.05 significance level.

Skeletal development is evaluated rather than chronological age to determine the growth-development period Proffit et al. (2007). For this purpose, CVM period is frequently used on hand-wrist films and mostly lateral cephalometric films. The method we preferred in our study was to determine the skeletal maturation period from the lateral cephalometric films taken at the beginning of the treatment and which we will use for our measurements. With this method, patients are not exposed to additional radiation for growth-development detection. CVM period is preferred in cases where it is necessary to determine the growth and development in order not to exceed the total radiation dose, since it is found to be high in reproducibility in studies. In order to determine the CVM period, the Lamparski method Lamparski (1972) was used to divide the individuals in the CS1 and CS2 periods into the pre-peak group, the individuals in the CS3 and CS4 periods into the peak group, and the individuals in the CS5 and CS6 periods in the post-peak group. According to these three different growth-development stages, pharyngeal airway measurements and hyoid measurements were compared.

When the literature was examined, no study was found that evaluated the pharyngeal airway dimensions and the position of the hyoid bone according to different growth and development periods. Tsai et al in 2007, examined the development according to the dentition period Tsai et al. (2007). Airway dimensions of individuals divided into 3 groups as early mixed dentition, early permanent dentition and permanent dentition were examined. In 2016, Akçam divided individuals with Class II malocclusion into different developmental periods according to hand-wrist films and examined airway dimensions. Apart from these studies, there is no study with which we can compare our findings. That's why; since the growth-development periods show parallelism with age, it was associated with age when examining our findings.

In two-dimensional studies to examine the changes in pharyngeal dimensions with growth; Bench, Tourne, and King reported that in the early stages of life, the nasopharynx grows mostly in the vertical direction, and the increase in the anteroposterior direction is quite low. They stated that the changes in the airway in the period after pubertal excretion were minimal Tourné (1991), Bench (1963), King (1952)

Arat and Erdem investigated whether the position of the mandibule and the height of the face are affected by the nasopharyngeal and oropharyngeal airway dimensions in their study on lateral cephalometric films of 40 individuals in the prepubertal and postpubertal period and nasal breathing. According to the research, no significant correlation was found between nasopharynx and oropharynx area and other measurements in prepubertal girls, postpubertal boys and girls. However, they suggested that there is a negative significant relationship between the angle between the palatal plane and the mandibular plane with the naso-oropharynx in prepubertal men Erdem and Arat (1991)

Hypertrophy of the adenoid tissue causes narrowing of the nasopharyngeal airway. Adenoid tissues grow until 14-15 years of age, and then gradually shrink to reaching adult size Odar (1978), Handelman and Osborne (1976) Similarly, the palatine tonsils in the oropharynx reach their maximum size during puberty and shrink after puberty Çoban  (2014). After the 11-14 age group of the individuals included in our study, reduction in adenoid tissues (AD1-Ba, AD2-Ho), nasopharynx (AD1-PNS, AD2-PNS, PPS) and oropharyngeal dimensions (PNS-Ep, SPPS, EPS, Upper Airway) an increase was observed.

Bench examined the position of the hyoid bone longitudinally from the age of three to adulthood and suggested that the Hy-MD measurement was 12 mm at the age of 12, with an annual increase of 0.78 mm Bench (1963).

Mitani et al. compared the growth characteristics of the hyoid bone, height, wrist bones and cervical vertebrae with the growth characteristics of the mandible during puberty Mitani and Sato (1992). The study was conducted on 33 girls between the ages of 9 and 14. According to the findings, the hyoid bone did not correlate with other parameters at any age. They also reported that there were different development rates between the mandible and the hyoid bone compared to other parameters. They argued that there are strong correlations between height and wrist bones and cervical vertebrae, as well as between bone length and length of hand bones. However, they stated that there was no significant relationship between mandibular growth and hyoid bone growth, and that the growth rate increased at most in all parameters at the age of 9, 10, and 11 years.

Tsai et al., on the other hand, examined the development according to the dentition period. Airway dimensions of individuals divided into 3 groups as early mixed dentition, early permanent dentition and permanent dentition were examined. As a result, they found that the upper airway dimensions increased with age, but the lower airway dimensions were greater in the early period. They found that the pharyngeal airway capacity increased with vertical growth and the increase in men was higher than in women Tsai et al. (2007). In our study, while a significant increase was observed in most of the airway parameters until the peak period, an increase in some parameters from the peak period to the post-peak period was detected in some parameters. In addition, as the growth and development period of the individuals progressed, an increase in the pharyngeal airway area, and a downward and backward movement in the hyoid position were observed.

With age and as the growth-development periods progress, the dimensions of the pharyngeal airway increase, and the hyoid bone moves downwards.