In the context of rapid urbanization, urban areas continue to expand, and different policy makers have chosen strategies to prioritize the protection of ecological land. However, the concept of ecological network has been sparked by many researchers worldwide and therefore many countries have applied this concept: the United States Fábos (1995), Ahern (2002), Conine et al.  (2004), Canada Hobden et al. (2004), Italy Toccolini et al. (2006), Portugal Machado (1995), Pena et al.  (2010), Japan Asakawa et al. (2004) China Chang et al. (2012), Brazil Giordano et al. (2008), and Turkey Akpinar (2016). The ecological network includes natural and semi-natural areas that are important for the biodiversity preservation, and the ecological corridors connecting them. However, it is structured into a set of sub-frames, reservoirs of biodiversity and corridors that connect them. According to Sordello et al. (2017), a sub-frame is defined by a set of spaces, more or less connected, made up of habitats with common characteristics and able to accommodate particular species. The reservoirs or core areas are the areas in which biodiversity is best represented and where species can carry out all or part of their life cycle such feed, reproduce and rest Linglart et al. (2016). These areas are interconnected by corridors that constitute functional links Arnould et al. (2011) allowing the circulation of species between different habitats Clergeau and Désiré (1999). Specifically, in Mediterranean region, different applications of ecological network have been applied. As an example, in Italy, the Lambro River Valley Greenways Systems consist in planning a network for connections between public parks, natural areas, historic sites and other open spaces Toccolini et al. (2006) In Portugal, Pena et al. (2010) have studied the development of ecological network for the Metropolitan Lisbon Area, with an interdisciplinary approach that provides an assessment of the relationship between landscape structure and landscape dynamics. Mainly, a significant attention is now being paid to ecological network Lamond and Everett (2019). It is due to their recreational, environmental, economic, and social functions, as well as other benefits to the cities in which they were implemented Lindsey et al. (2001). In this breath, Tunisian cities especially coastal ones are marked by a significant urban extension, which led to the fragmentation of landscapes and the degradation of living environment; this is the case of Sousse city. The main objective of this work is to; i) demonstrate the useful of the ecological network planning in reducing landscape fragmentation and the loss of natural habitats, and ii) strengthen regional and supra-regional connectivity.

Figure 1 presents the Sousse region, which is located in the Tunisian Sahel and covers an area of 2308 Km². It has a population of 416 330 inhabitants INS (2017) and includes nine delegations: Sousse Sidi Abdel Hamid, Sousse Riadh, Sousse Medina, Sousse Jawhara, Hammam Sousse, Akouda, Sidi BouAli, Hergla and Enfidha. The climate in the study area, belong to the lower semi-arid bioclimatic stage. It is characterized by a hot and dry summer, and a soft and humid winter. Thus, the annual average rainfall is about 200 mm; and the annual average temperature is about 18.6 °C. Sousse region is marked by economic, environmental, ecological, and cultural importance. Also, it provides the diversity of landscapes, namely forest, coastline, rural, urban, industrial, and natural, hence its rich flora and fauna Boussema and Khebourallouche (2020). 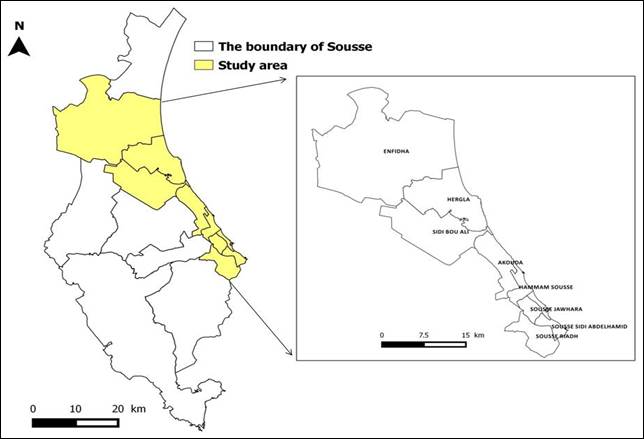 In the aim of this research, the methodology is broken down to five steps. The first one is based on the analysis of the land use map of the study area. The second one presents the reclassification work necessary to form the major habitats. The third consist of the determination of sub-frames. In the fourth step, a study of species is carried out. At the end, the supra-regional connections are defined.

The definition of sub-frames is done through taking into account the different natural environments present in the study area. Thus, this first step is to define the composition of each one by affecting all land cover classes potentially useful to biodiversity to at least one sub-frame. The identification of the representative sub-frames of Sousse region is extracted from the Land use map of the INFOTEL Data Base (DB) 2017. It was modified after it has been collected from the IFPN (2010).

In addition to the land use data, naturalist and ecological data relating to the target species were also used, from inventories and observations made by the agents of GDF (2018) or naturalists from partner structures or field checks. The aim was to select species representative of the different sub-frames studied so that a functional network could be set up Silvano et al.  (2017). Each of the selected species is also intended to be representative of a group of species with similar ecological requirements. Also, we have referred to the Red List of Endangered Species of International Union for Conservation Nature IUCN (2020).

4.1. Land use of Sousse region

The INFOTEL DB 2017 contains a series of information corresponding to the distribution of forests, extent, type of reforestation, type of vegetation, etc. IFPN (2010). It is of major interest for our study, as it is the most recent detailed land use layer that has been recovered. It contains 32 land use classes Figure 2. The landscape of the Sousse region is dominated by urban areas; cultivated areas (irrigated cropland, dry arboriculture, heterogeneous agricultural areas, etc.); forests (deciduous, conifer, mixed); rangelands (steppe); grasslands; and wetlands (marine and inland). The rangelands are located in the north near the dry arboriculture; in the center near the wetlands and cultivated soils; and in the south near the urban areas. The cultivated soils are located on the north side and in the center. For irrigated cropland are at the level of Enfidha city. The distribution of urban areas between the north and the south of the region is not homogeneous. Along the shoreline, these areas are compact and formed a ribbon habitat. On the northwest side, an urban mass which correspond to the center of Enfidha city and surrounded by small villages. Whereas, in the middle, the city of Hergla is on the coast while Sidi Bouali is rather inside. In the south, the city of Sousse is presented and formed the largest urban center in the whole region. Forests are located in the north and south of the study area. Wetlands are totally represented by sebkha on the northeast side, the middle and on the south. 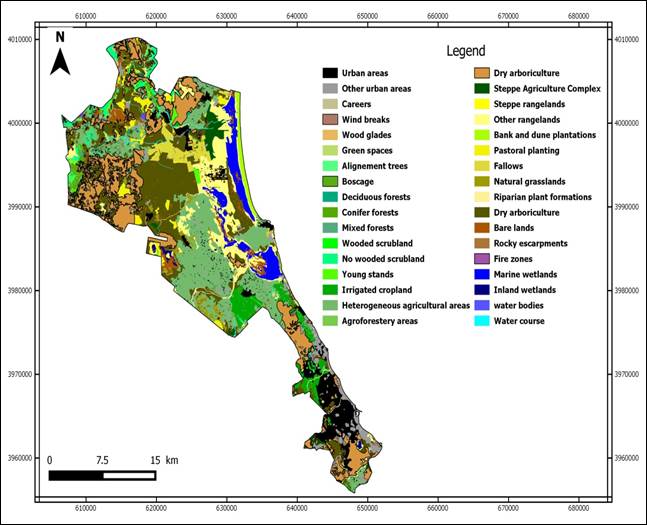 4.2. Major types of habitats and associated sub-frames of Sousse region

The site, oriented northeast-southwest, is characterized by a mosaic of environments of uneven areas and diverse natures. They are located in the middle and northwest (coastal side) and practically interconnected, which gives a singular value to the natural heritage of the territory. Figure 3 shows that three sub-frames were identified: a forest habitats sub-frame, a semi-open habitats sub-frame and a wetlands habitats sub-frame. The forest habitats sub-frame consists of two main types of habitats, forests, and shrub plantations; the same thing for the semi-open habitats sub-frame which contains two types of habitats, namely the rangelands and grasslands; whereas the wetlands sub-frame occupies four types of habitats: water courses, water bodies, riparian forests, and wetlands. However, the semi-open sub-frame occupies the largest area, about 30 % and consists in different environments scattered on the northwest side particularly at the level of Enfidha. In the middle, they are more condensed especially at the level of the delegations of Hergla and Sidi Bouali. And some environments persist on the southwest side. The forest sub-frame is smaller in size, and the habitats are more numerous in the northwest and weakly on the opposite side. The wetland sub-frame is particularly limited at the level of the coasts and sebkhas. 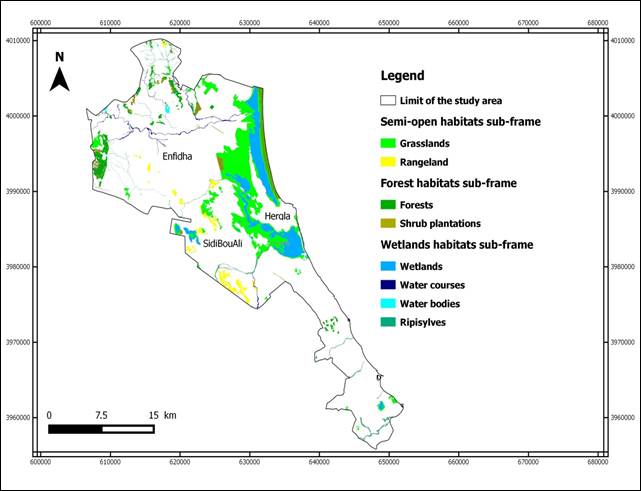 The first specie is representative of the forest sub-frame since the Hare is a forest mammal. It is well suited to living in arid and desert environments. However, it is threatened by a number of predators and its mortality is linked to weather conditions, nutritional deficiencies and road traffic. Delibes-Mateos et al. (2010) explained other reasons related to urbanization, increased hunting, intensive agriculture, and increased use of pesticides and fertilizers. Currently, the IUCN Red List lists the species as a Minor Concern Villafuerte and Delibes-Mateos (2019).

For the semi-open habitats sub-frame, the Hedgehog is a mammal that occupies grasslands or forest edges but prefers hedged-rich habitats Hubert (2008). It is therefore a species which take open environments as their habitats.  At night, the male moves on 0.5 to 25 ha and the female on 0.5 to 10 ha Vaucher (2013) which is adapted to the scale of our study area. Increases in the number of roads and habitat loss are the most serious threats to the Hedgehog. This species is listed in Appendix II of the Berne Convention and in Appendix IV of the European Union Directive on Habitats and Species Amori et al. (2008).

The Marbled Teal has been mobilized as a representative wetland species. It is a dispersive and partially migratory species Del et al. (1992). It is able to disperse in search of suitable habitat at any time of the year under changing conditions Kear (2005). It is adapted to wetlands in semi-arid region Green and Silva (2007) and breeds in dry steppes areas on shallow or alkaline freshwater ponds with well vegetated shorelines Green (1993), and rich emergent and submerged vegetation Kear (2005). It is legally protected in Tunisia, and it is inscribed on the IUCN Red List under the status of Critically Endangered (Bird Life International 2017).

The three sub-frames of the Sousse region are identified and carried out on a regional scale. It highlights on the functional and potential ecological habitats for the species already selected. On the other hand, supra-regional connections are proposed so that Sousse region will be interconnected with neighbouring regions such as Bouficha, Kairouan, Sidi El Hani and Monastir; and even be part of a national context. For these reasons, various proposals are presented in Figure 5, i) a connection to the north of the region can be established with the forests of Bouficha. While the forests of the study area are in the north, links with the forests of the Bouficha delegation are possible knowing that the city is home to the only animal park in the entire Sahel region known as Friguia Park, with a considerable area equal to 30 ha. ii) A connection to the middle can be established between the sebkha of Halq El Mingel and the Sebkha of El Kelbia situated in Sidi El Hani, which has been classified as a Ramsar site since 2007, and this connection is made through the water course that connects the two sebkhas. Also, a connection with the Kairouan grasslands is possible, since the city of Kairouan is located at 50 km from Sousse and is recognized by its grasslands and farmlands. iii) A connection can be created in the south with the Sousse sebkha and the Sahline lake which is located in southwest of Monastir city. 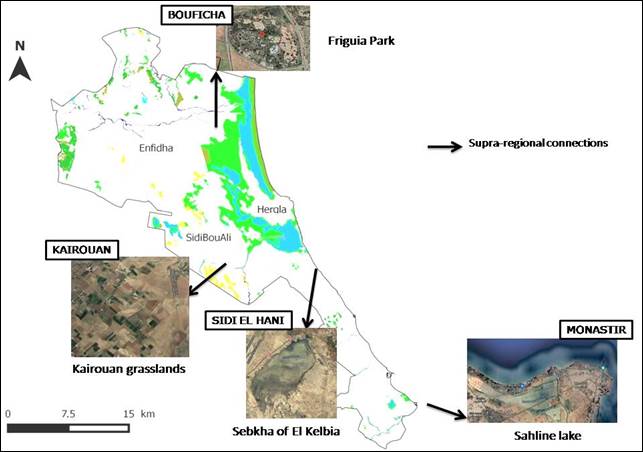 The spatial organization of the constituent environments of Sousse region has resulted in eight main types of habitats: forests, shrub plantations, grasslands, rangelands, water courses, water bodies, ripisylves and wetlands. The compilation of these environments has allowed the formation of three pioneering sub-frames of the green and blue infrastructure: a forest habitats sub-frame, a semi-open habitats sub-frame and a wetlands sub-frame. However, the semi-open sub-frame is dominated by its constituent environments, occupying 30% of the study area. Research on animal species present in the study area, their distribution, their characteristics and their vulnerability revealed three representative species which are subservient to these types of environments: Cape hare for the forest habitats sub-frame, North African Hedgehog for the semi-open habitats sub-frame and Marbled Teal for the wetlands sub-frame. So, the sub-frames identified, and the supra-regional connections proposed in this research can be considered as a new way of space structuration rather than as a new tool to freeze the economic and societal development of Tunisia and similar countries in Mediterranean region. It is about building a future where it forms one of the pillars of sustainable development.

The authors declare no conflict of interest.